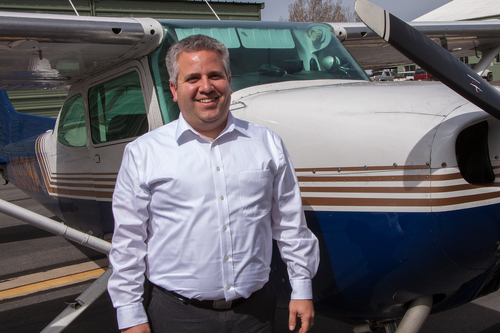 Where could you imagine you had landed if you were walking among the hangars and heard a pure operatic tenor hitting high Cs with abandon? Most likely, you’re at Truckee Tahoe Airport and hearing Robert Bousquet practice a famous aria while working on his airplane.

“Singing is something I try to do every day,” he says. “Hangars are actually a great place to sing with their concrete floors and corrugated metal walls. They are a really interesting sound-reflecting space.”

Growing up in Truckee, Robert found singing and flying when he moved back home from Los Angeles where he attended the University of Southern California, majoring in music. While there, he worked as a software developer for the university to help pay his college tuition and played percussion as his instrument.

After graduation and marrying Jennie Thompson, who also grew up in Truckee, Robert started New Leaders, a company that develops software for businesses trying to grow beyond their current systems and helps them find unique and innovative ways to succeed.

Able to work online, Robert and Jennie returned to Truckee in 2005, but there was no place to practice or play percussion, so he began to sing. “It was something musical I could do every day,” he says.

Robert’s path to becoming a pilot was serendipitous. One of New Leaders’ first projects was building a database for Whispertrack.com, a business owned by a local KTRK based pilot. The goal was to give airports an intuitive web-based tool to manage and update their noise abatement procedures. During negotiations with Garmin, Robert realized that he would know more about the product he was pitching if he were a pilot. He began taking flying lessons at Truckee Tahoe Airport, earning his private pilot certificate in 2013 and instrument rating soon after.

In 2017, Robert bought into the partnership of a 1976 Cessna 182 and used his airplane to fly for business. “It’s the easiest way to maintain relationships with clients,” he says. “I’m an advocate of using technology in almost every area of my life. At the same time, I recognize that people need in-person relationships, which is still the best way to communicate with someone.”

Robert was also eager to support others who wanted that option but couldn’t afford to own an airplane. The Tahoe Flying Club, started by local pilot Matt Michael, existed but the club did not own an airplane. “I jumped on board to connect with those pilots and to share the story of our airport with the community. Aviation is available to normal people, and we have the best base in the world for flying to amazing places,” he says.

While playing drums in Truckee with the Deckheads, a local country and rock group, Robert discovered he had a natural operatic voice when he joined a local community chorus. He didn’t like hearing his own voice at first but, in time, found that the “metallic ring” he heard was a virtue that his music directors and teachers have helped him to understand and perfect. Now, he appreciates the convenience of being able to fly to destinations where he can rehearse and perform in operatic productions, such as the California Opera in Fresno. “It combines all the things that I love to do.”

From his unique perspective, Robert knows that singing and flying require dedication, discipline and hard work. “Once you understand the rules, you have flexibility within those rules of how to navigate from point A to B, whether that’s artistic interpretation of a piece of music that was written 300 years ago, or looking at a lot of different factors to prepare for a flight, such as weight and balance, fuel loading, timing and weather,” he says.

“Both are a balance of making sure that you are prepared and conservative in your choices so that you have options. In the case of flying, you never want to go in with a cavalier attitude that is going to cause an unsafe situation, and the same is true with music. You don’t want to be unprepared or not pace yourself to get through the whole performance.”

Robert’s musical talent is shared with his children who dance and sing, while his wife Jennie designs and sews elaborate costumes. In addition to business, he appreciates the convenience of flying to family events, vacation destinations, or to colleges the kids are interested in attending. “The airplane has helped us to stay in our hometown, but also to experience a lot of what the West has to offer,” he says.

Whether bringing people together through musical performances, or his support of the Tahoe Flying Club, Robert’s dedication to his community is ongoing. “The great thing about Truckee is the people. We should be looking out for each other, whether we have a passion for nature, or skiing, or other activities. We should all want everyone to have access to those different things, and that’s what makes this place special. “

If you are lucky enough to hear a beautiful operatic voice resonating from a hangar, smile and say hi to fellow pilot Robert Bousquet.

*Upcoming performance: On Dec 12, Robert will be performing in Truckee as a soloist with the Tahoe Symphony in Handel's Messiah.  Learn more at TahoeSymphony.org