Get to Know Your ATC!

Pilots always hear air traffic controller's unique voices over the airport’s tower and ground control frequencies, but rarely know the face or story behind the controller.

Since the tower’s inception in 2017, Midwest ATC has staffed a team of five or six controllers (depending on the season), to safely and efficiently control up to 40,000 annual flight operations at Truckee Tahoe Airport.

Local pilot and writer Laurel Lippert interviewed the controllers. Photographer Tom Lippert gets credit for the great photos. Enjoy getting to know your KTRK ATC team! 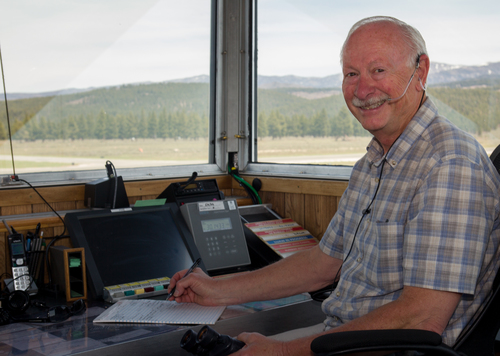 The fifth and final Air Traffic Controller in our "Get To Know Your ATC" series is Lawrence King. Born in Riverside and raised in Redlands in Southern California, Lawrence King decided on trade school after high school and became an electronics technician. Not long after, he decided to join the U.S. Navy, based in Long Beach, CA, and worked in the combat information center onboard a destroyer.

When he decided to retire from the Navy, the head of its project transition program suggested that King could be an air traffic controller. That sounded good to him, and his first job with the FAA was at Riverside Airport, close to home. Later, he transferred to Chino Airport where he took flying lessons from a fellow controller and earned his private pilot certificate in a Cessna 182.

From there, King joined Ontario Approach Control until retiring from the FAA in 2009, at age 56, the FAA’s age limit for controllers. He then took ATC jobs at non-federal contract airports in San Bernardino and Victorville,. “I have a passion for this career,” he says with genuine enthusiasm. “It gets in your blood.”

Having experienced the years of limited technology in airplanes as an ATC, King says that “GPS is the greatest thing for pilots, knowing exactly where they are.” He encourages his five grandsons to consider going into the military or becoming a controller, “the best well-paying job there is where a college degree is not required.”

King, who commutes weekly to Truckee, says that, as long as you pass the 2nd class FAA physical every year, you can continue to be on the job. He and his wife live in Lake Arrowhead in the San Bernardino Mountains, and his favorite activity now is RVing with his wife, after a life of skiing on water and snow.

Fourth in our series is Air Traffic Controller Rhonda Legge. 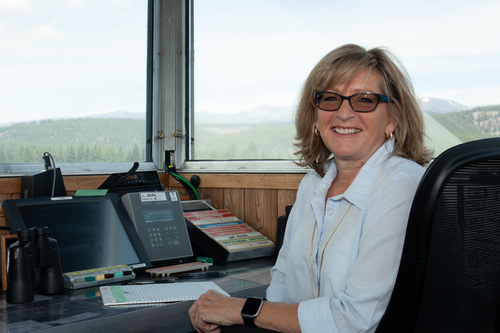 The foundation for Rhonda Legge’s aviation career began when she joined the U.S. Air Force in 1980 at age 21. After four years in the military, where she worked as an air traffic controller at two bases, including one in Germany, Legge returned to civilian life.

Soon after, she took the required tests to join the FAA and began directing traffic at Palo Alto Airport, the busiest single runway airport in California.  She went on to serve as ATC at Stockton, Oakland and San Francisco airports, among others, often as a supervisor or manager, before joining NorCal TRACON.

“I’m very proud of my career,” says Legge. Born in Louisville, KY, she spent her younger years in Mississippi, Louisiana and North Carolina. The variety of places she lived and worked has given her a unique perspective as an air traffic controller in Truckee.  Pilots have commented that they love hearing her calm voice and soft Southern accent.

When Legge retired from the FAA in 2016, she moved to Reno and soon learned about the new tower coming to Truckee. She joined the team when it opened in the summer of 2017 and says, “I love it to this day.”

Explaining the contrast between controlling air traffic in SFO and TRK, Legge says, “A busy airport is ‘proceduralized’. There’s no off-the-cuff at SFO Tower.” TRK’s unique setting demands that controllers plan “very far in advance” for the variations in aircraft, terrain and pilot skills.

When she’s not in the tower, Legge enjoys exploring the West Coast, traveling abroad and spending time with her son and daughter, on their paths to their own careers.

Third in our series is Air Traffic Controller Todd Domini. 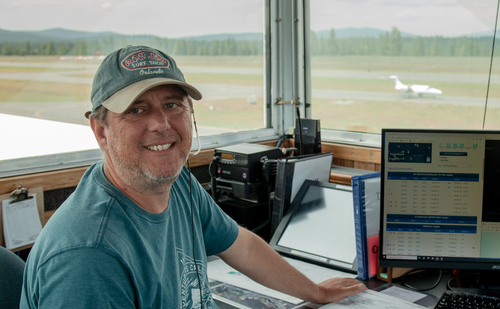 After graduating from high school in Potlach, Idaho, a farming and logging community, Todd Domini was inspired to consider options other than college when he scored well on his ASVAB (Armed Services Vocational Aptitude Battery) test and qualified for a job in the U.S. Navy.

The recruiter showed him some job descriptions for opportunities on index cards, and air traffic controller was one. “I’ll do that one,” Domini told him. “That’s how it came about,” he says of his career as an ATC. “It was just the luck of a lucky card.”

Joining the U.S. Navy in 1988, Domini was stationed at Whidbey Island in Washington, where he met his wife-to-be, and his first ATC duty station was Adak, Alaska in the Bering Sea. From there, he was sent to Fallon, Nevada, for four years. When he felt it was the right time to leave the military, Domini began to look for a position with the FAA.

His first civilian assignment was at the busy Burbank, California, airport. From there, Domini worked for six years as ATC at Reno-Tahoe International Airport before taking a Department of Defense position at a helicopter base in Fort Lewis, Washington. He finished his 32-year-long career with the FAA in Fort Huachuca, Arizona.

Domini and his wife happily returned to Reno and then learned of the opening for an ATC at TRK through Larry Finney, with whom he had worked at RNO. They love the Sierra Nevada and Tahoe and enjoy feeding the chickadees on Chickadee Ridge up on Mount Rose, as well as skiing, snowshoeing and hiking with their two sons.

Next up in our series is Air Traffic Controller Steve Ingebretson. 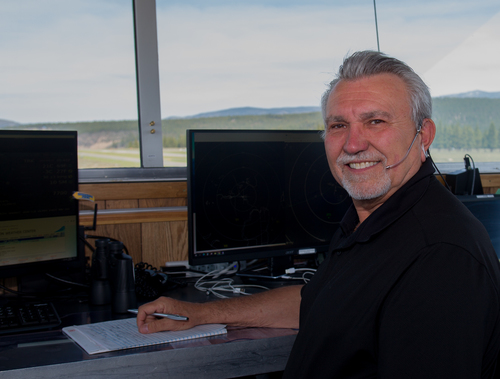 While living in the Bay Area, Steve Ingebretson learned about the new tower at Truckee Tahoe Airport and the need for air traffic controllers. With a wide range of aviation experience, and as a longtime visitor to South Lake Tahoe, he was eager to hop on board.

While most of his 5,500+ hours of flight time is in corporate jets, Ingebretson respects all fellow pilots who are “trying to improve and find better ways to do things.” In 1987 he began working as a controller at Bay Area airports, including Buchanan Field in Concord, the 38th busiest airport in the country with 300,000 operations a year. While there, he helped develop audio cassette tapes, called “So to Speak,” to teach pilots proper phraseology to use on the radio.

Growing up near Chicago, Ingebretson earned an electronics tech degree, and then a four-year aviation degree in Denver. Soon after, he and a friend rented a Cessna 172 and flew cross-country from Denver to Chicago and Florida. Now, when he’s not controlling Truckee air traffic or flying corporate jets, he sells real estate and insurance, and occasionally works in construction. With all that said, he will tell you that his favorite job is as ATC at TRK.

Ingebretson also has a unique perspective on the advancements in technology in aviation. Aware that the transition from “steam gauges” to all-glass digital cockpits is amazing but has its challenges, he says, “The main thing is—fly the airplane. As long as the engine is running, we can make things work.”

Besides his time in the tower, Steve Ingebretson enjoys hiking and biking in our beautiful Sierra Nevada and spending time with his grandchildren. 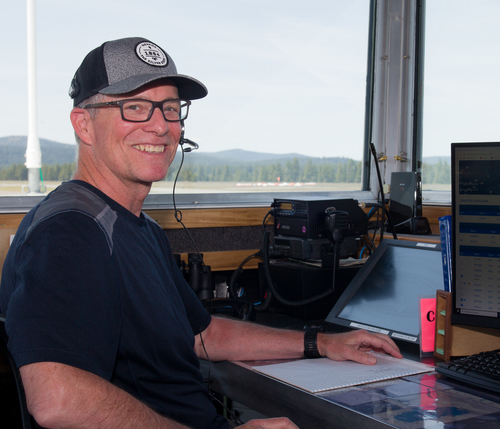 When you hear Larry Finney’s voice on the airport’s tower frequency, you might hear his experience speaking. The son of an airline pilot, he learned early on of the passion for flying and importance of humility that comes with being at the controls.

Raised in Santa Rosa, CA, Finney earned his private pilot certificate and then joined the military. He served in both the U.S. Air Force Reserves and Nevada National Guard, with roles as an Avionics Technician, C141B and C130 Flight Engineer, and Base Operations Specialist. His service background and experience teaching and training others paved the path to air traffic controlling.

In 1986, Finney was hired by the FAA to work as air traffic controller at Reno Tahoe International Airport, which he did for 21 years, including training and supervising, and then moved on to Northern California TRACON. After retiring, he went to NAS Fallon to work for a DoD contractor as a Range Control Officer. He joined the TRK team in 2017, a few months after the tower opened.

The best part of his job, says Finney, is knowing that “nothing is the same.” Changes in weather, traffic, terrain, and the variety of aircraft are the uncertainty that is here from day-to-day, sometimes hour-to-hour. When not controlling, his favorite off-time pleasure is riding his gravel bike, long-distance trail running, and spending time with his family and five grandkids.
Larry Finney’s pleasant voice also reflects his passion for being here and respect for those who use the Truckee Tahoe Airport. He welcomes pilots and nonpilots to visit the tower if they are curious about the picture from “up there.”